The fact that “the boundaries of the field are being revised” is the first really significant evolutionary change to occur since the inception of the discipline of African art history in the early 1960s. We’re not in the midst of a crisis; rather, we are experiencing a shift in values that engages ideas associated with postmodernism and colonial/postcolonial discourse.

The current situation seems a logical response to the art world’s long overdue recognition that Africa has much more to offer than just its traditional or classical arts. This, coupled with art history’s reorientation to include a much broader spectrum of material (visual) culture, has created a situation that many of us who are studying and teaching the visual cultures of Africa find exciting but also challenging. Can one person successfully handle all manifestations of visual culture for the entire continent, especially in the context of mentoring graduate students?

Is there a problem if, as Sidney puts it, you are “more familiar with masks and shrine sculpture than Triangle workshops and Biennales” and you have a student who is engaging modern or contemporary issues? I don’t think so. I have found it rewarding to learn with my students and have found the burgeoning discourse on visual culture and colonial/postcolonial society in Africa fascinating. But it has been a challenge staying on top of all that is now being written on the subject. Since my own research is focused on “classical” traditions, I have made sure that students pursuing subjects dealing with colonial/postcolonial art and society also work with a mentor who is familiar with modern/contemporary art and critical theory. Ideally, I’d like to see Michigan State University hire a specialist in contemporary African arts, but it is unlikely that this will happen anytime soon.

We are not alone in revising the boundaries of our field. Parallel shifts are occurring in other ,areas of art history, including Latin America, Asia, Oceania, Native North America, and the Islamic world. Increased awareness has led to a demand that these modern and contemporary traditions be integrated into art history curricula. But most art history programs are not able to support specialization in all regions. The visual cultures of colonial and postcolonial societies throughout the world in the twentieth and twenty-first centuries can, and perhaps should, be studied in a comparative context. The content of a great deal of contemporary art in Africa, especially that produced by academic artists working in Africa or abroad, may be grounded in local (African) tradition, but the audience to which this work is directed, the formal idioms of expression, and the broader sociopolitical issues that it addresses are global. Though it is critical to seek an understanding of the specific environment in which a particular artist or work of art lives, it seems that many of the issues being explored by scholars and critics of modern and contemporary African art are shared with scholars working in other parts of the world, especially those areas with histories of political or cultural hegemony by the West. It is perhaps more viable, at least in the short run, to think of a single faculty position in contemporary world arts, filled by an individual with research experience in a specific geographic area and with a strong grounding in critical theory and some knowledge of other world traditions. 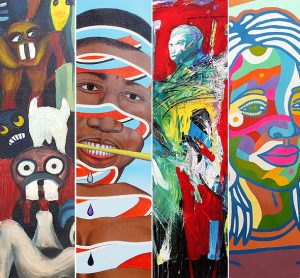 Over the last few years I have offered a graduate seminar that deals with twentieth-century academic art in Africa, and have integrated the interpretation of modern and contemporary traditions into my undergraduate courses. This semester I am using Sidney’s new book, Contemporary African Art (2000), for the first time. It has made dealing with these issues much easier and more meaningful for the students. But at the same time it has exacerbated a problem with which I’ve been struggling for several years. I am finding it more and more difficult to work with the conventional organizational schema based on geography that many of us who teach African art history continue to use. I currently offer two advanced undergraduate courses; one deals with west Africa and the other with the rest of the continent. I am considering an alternative scheme that replaces these two courses with three that are based on the general approaches that have informed our interpretations of visual culture on the continent. The first will consider pre-twentieth-century Africa–traditions that have been interpreted in an archaeological and/or historical context; the second will examine visual culture in an ethnological context, drawing upon the literature of aesthetic anthropology and art ethnography; and the third will consider modern and contemporary issues–an analysis of twentieth- and twenty-first-century visual culture grounded in contemporary theory.

I think it is going to be a while before the dust settles. In the meantime it is important that we maintain the dialogue that was triggered in 1999 by Fred Lamp’s “First Word” and is being continued here. Perhaps it would be useful to carry the discussion into a more dynamic forum, such as an electronic discussion list (i.e., H-AfrArts) so that more individuals may participate. Sustaining a constructive dialogue will ensure that this evolutionary change is a positive growth experience for the field.